We can all picture the traditional scene –

A secret agent, battle-hardened and hollow-eyed, sits opposite their out-of-touch superior. Having just failed a routine debriefing, they now stoically listen as the ‘man in charge’ firmly explains their precarious position.

Though our spy’s unconventional methods have garnered results in the past, their recent undercover exploits have crossed the line. They’ve become emotionally entangled in the current case and can no longer be trusted.

“I can’t clear you for the field,” says the antiquated Head of Intelligence. “You’re too close to this, and you’ve put your colleagues in jeopardy. It’s time to take a step back.”

Since surviving the action-packed endurance exposition better known as the 2020 Sewing and Stitchery Expo, I feel just like this indurate secret agent. Bruised and battered, but also altered and unwilling to return to the mundane life I led before. I have no choice but to disregard orders, and – though it’s ill-advised – pursue my chosen life of espionage…er…I mean high-stakes sewing expos, no matter the personal cost. 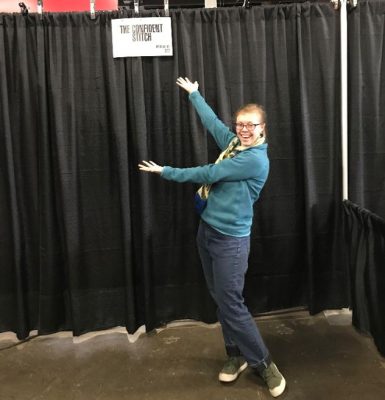 Puyallup and At 'Em

Okay, so maybe our crazy journey to Puyallup wasn’t quite as dramatic as the scene I’ve laid out above, but the preparation and subsequent journey to the Expo was – like a good Bond film – equal parts exhilarating and terrifying!

A real ‘trial by fire’ kind of experience, we learned SO MUCH in a very short amount of time. Thus, as a means to both decompress and revel in this amazing adventure, I’ve decided to give a mini PSSE debriefing, thereby revealing to you the nitty, gritty truth behind this undertaking. The good, the fab and the ugly! 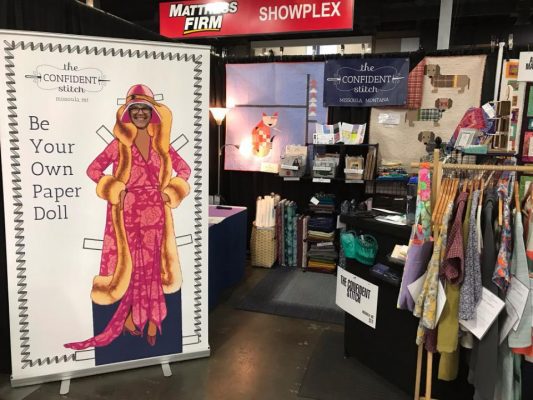 If you’ve ever been in our store, (or on our website) then you know we have A LOT of fabric. And not just any fabric – AWESOME fabric. (If we do say so ourselves!) But our little Puyallup booth was only a 10′ by 10′ square and the rules about taking up more than your allotted footage are very strict. So, we had to think long and hard about what to bring.

But, fledgling expo-ites that we are, we had no idea what to focus on! Should we bring knits? Voiles? Wool? Rayon? Quilting cotton? Canvas? Waxed cotton? Basics? Florals? Polka dots???? No sooner had we decided on what to bring than a new bolt (or ten) would arrive in the mail, and suddenly we were back to square one.

In the end we realized that – though everything we brought was good – we should have brought MORE! Which brings me to our next realization. For the 2021 Expo…

As mentioned, 100 square feet is not a lot, and it feels like even less when you’re trying to squeeze fabric, patterns, miscellaneous kits, notions, and a dozen eager sewers into it!  Real estate can be pricey at a well-attended expo like the one in Puyallup, so we were cautious about investing in multiple booths. But, as usual, hindsight is 20/20 and, hopefully, next year our booth will be as well!

Though our booth was small, she was mighty, due primarily to our preemptive planning.

While spontaneity is usually our strong suit, we realized (with a push from Lane, our project coordinator) that ‘off the cuff’ was not the way to approach our booth organization.  So, we planned and we practiced and planned some more! We even set up a mock booth in our store basement.

Planning, however, will only take you so far. Eventually, you have to dive in!

Swatch Out! Here We Come! 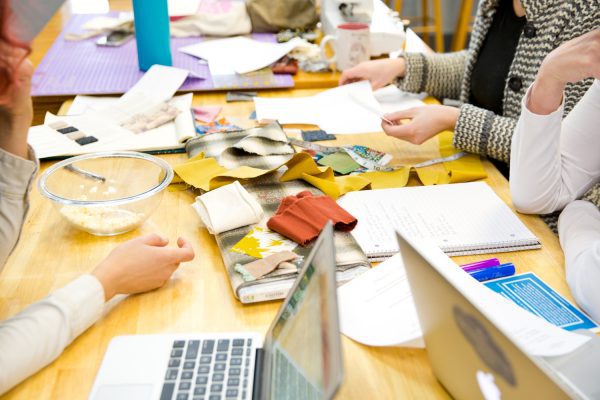 As if preparing for Puyallup wasn’t hard enough, we decided to put ourselves further through the wringer and introduce the new Confident Stitch Swatch Service simultaneously!

A curated and informative fabric shopping experience delivered right to your door, our swatch service features three different cards – Garment Fabrics: Warm Tones, Garment Fabrics: Cool Tones, and Quilting Cottons – which each contain eight, carefully selected, fabric swatches that coordinate with the upcoming season. The garment fabrics work together as a capsule wardrobe and the quilting cottons create an unconventional collection that gives a subtle nod to the time of year.

Though it was not an easy undertaking, we managed to get our Swatch Service up and running in time for the expo! As garment makers ourselves we, know how difficult it can be to find good quality garment fabric – particularly via online shopping! Fabric shopping is, at its core, a tactile experience, and we don’t anticipate that changing anytime soon.

So, if you haven’t already, read more about our new Swatch Service! It may be just what your sewing life is missing.

In order to transport our fabric booty to Washington, we rented a rather ungainly (and slightly creepy) white van. While it held us in good stead, driving it in busy Puyallup was something of a trick.

On Saturday afternoon, I took the keys and left the convention center to grab a few more patterns and a bolt of fabric. Three hours later, our long day at the expo was over, and we were headed ‘home’ for the evening when I realized I couldn’t find the keys ANYWHERE.

Have you every had a moment where an awful revelation makes your heart stop dead in your chest? Well, this was a million times worse than that.

We tore our little booth apart in search of the keys (which took all of five minutes), and, after checking coat pockets and purses for the umpteenth time, were forced to concede that I had lost them.

While trudging disconsolately back towards our – most probably – locked van, Kate graciously reassured me that it would be alright, though I didn’t see how. I was staring resolutely at the ground in an effort to hold back tears when suddenly a flash of silver and plastic caught my eye. There, in the middle of an exceptionally busy thoroughfare, lay the intact keys.

Suddenly, negotiating the streets in a cumbersome white van never felt like such a blessing. 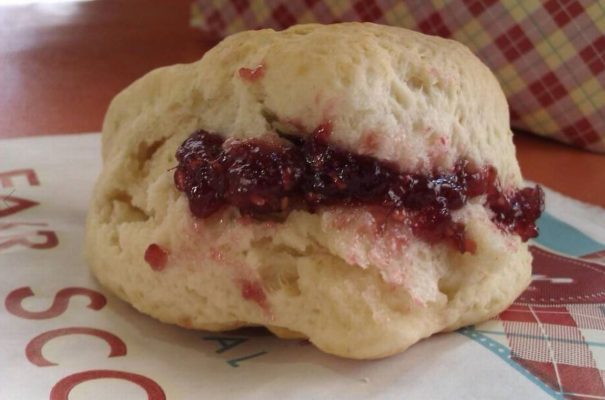 As a person who has never attended an expo let alone worked one, I was startled (but not wholly surprised) to discover that they are exhausting! The travel and set up time combined with long days, florescent lighting, and a cement floor would make the whole experience unbearable, were it not for the fact that…

We met so many awesome people!

From Sew Kind of Wonderful’s Jenny Pedigo, to Klum House‘s Ellie Lum to the one and only Marcia Derse – Kate and I pretty much spent four days fan-girling like crazy! It’s remarkably inspiring to be surrounded by dozens of small business owners, pattern makers, crafty proprietors and teachers who all work so hard to spread the art of sewing! 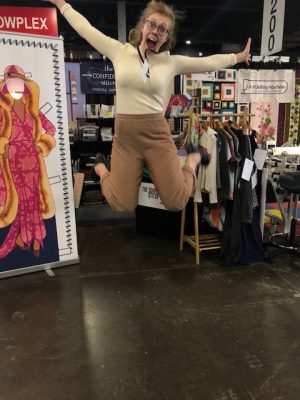 Aside from the many amazing vendors, we also were overjoyed to meet the many expo attendees! We swapped stories with people who had come from all over the country to learn, shop, and spend time doing what they love!

We are so thankful to have met so many amazing sewists. And, in fact, it was the support and enthusiasm of the expo patrons that ultimately convinced us PSSE is an annual event we want, nay, need to be a part of!

We’ve spent every working minute of the last three months preparing for this expo, and, only in hindsight did we realize that we should have spent closer to six! However, despite giving ourselves a shortened window in which to prepare, we managed to pull it off thanks to the amazing people we know and work with!

Elizabeth and Evelyn spent hours assembling kits, counting inventory, filling out labels, and cutting fabric, all while managing to package orders and attend to customers during store hours. Jen took on extra classes and helped with miscellaneous sewing projects. Bonnie worked overtime to have all our amazing garment samples ready to display. Lane, organized, planned, scheduled, and networked till they were blue in the face. Bess tackled every major picture and graphic request thrown her way (including the designing of our amazing paper doll banner!). And, as for Kate and me, we just tried help with whatever was leftover!

Additionally, we were offered help, insight, useful tools and even lightweight furniture by friends and customers acquainted with the expo scene – a gift we’ll not soon take for granted!

In short, any success we enjoyed at this year’s expo was due entirely to the work of our wonderful team, and local sewing community.

This Could Be the Start of Something Big 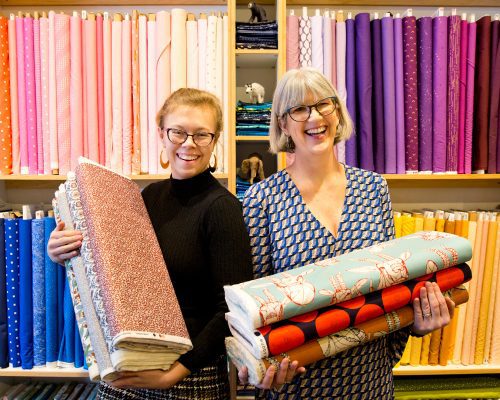 This year’s Sewing and Stitchery was an incredible whirlwind! Thank you to every person who supported us – you can’t know how much it means.

A few month’s rest, and then back we go, into the fray!

14 thoughts on “A Sewing and Stitchery Exposé”

Hey all you quilted coat makers out there! Just wa

It’s way harder than it should be to shop ethica

Today is your last chance to get a free pattern, s

We sewists often have a questionable habit of stoc

Cordur-joy! We featured two of these 14-wale stre

"I've had my eye on a few patterns that will, not