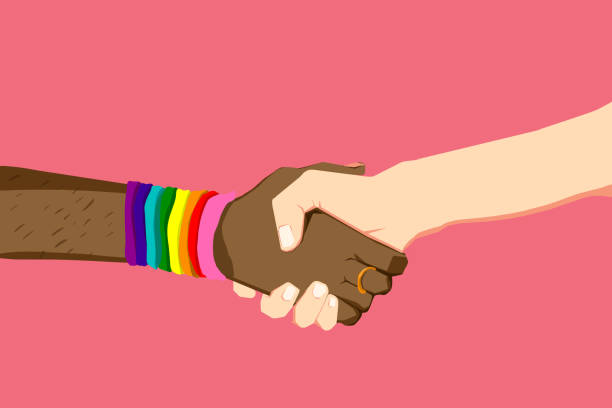 Existing in a space where your identity goes continuously unacknowledged is hard. It’s also dangerous. Unfortunately, LGTBQIA2S+ folk face hate-based violence every day, as well as attacks on their rights by state and local governments. The good news is there’s a simple – and hugely important – thing you can do right now to become a better Queer ally – learn and respect labels.

Understanding the language surrounding concepts like gender, sex, and sexuality (all of which are different) makes the learning process a lot less intimidating! So I’ve put together a glossary of terms you’ll encounter when exploring the Queer alphabet, largely based on Trevor Project’s resources.

In this post, I’ve also included a discussion of gender pronouns – a concept that is a lot less scary and complicated than it’s made out to be!

There’s a lot of work that needs to be done culturally in order to create a safe space for all, and there’s no shame in starting right now!

The battle for inclusivity is an ongoing process, and working to actively learn and better understand is integral to that process. So be vocal about your support! Educate your neighbors, children, friends, grandchildren, and coworkers. Educate yourself. Let it be known to the queer folk around you that they are loved and supported.

*The LGBTQI+ alphabet continues to grow, and this glossary will need to be updated as we learn new things about the broad and amazing spectrum that is human gender and sexuality! Keep in mind there are many ways to define these common words and phrases, but the only person who has the power to label you is YOU*

This is the acronym for Lesbian, Gay, Bisexual, Transgender, Queer and/or Questioning, Intersex, Asexual, Two-Spirit, and the countless affirmative ways in which people choose to self-identify.

Used to describe people who experience little to no sexual attraction. Some people on the asexual spectrum desire sexual intimacy, while others do not. However, many asexual people desire romantic relationships, and romantic orientations are a way for Aces to communicate who they prefer to date or form relationships with.

A binary system is something made up of two opposing parts. Gender (man/women) and sex (male/female) are examples of binary systems.

Used to describe people who have the capacity to form attraction and/or relationships with more than one gender.

Bisexual Pride Flag – The pink is intended to represent attraction to the same sex only. The royal blue to the opposite sex only. While the purple signifies attraction to all genders / more than one.

Used to describe people whose gender identity aligns with the sex they were assigned at birth.

In the past, only men who are attracted to men have used the word “gay”. Now, it is common for “gay” to be used by anyone who is attracted to the same sex or gender.

Gay Men’s Pride Flag – This modern gay men’s pride flag is a revamp of an earlier flag that featured a range of blue tones. That version was problematic because it used colors that were stereotypical of the gender binary. This updated flag is inclusive of a much wide range of gay men, including but not limited to transgender, intersex, and gender nonconforming men.

A social construct that tells us what certain genders are “supposed to be like”, based on a group of emotional, behavioral, and cultural characteristics. “Man”, “woman”, and “non-binary” are examples of gender labels.

The way in which we present ourselves, which can include physical appearance, clothing, hairstyles, and behavior.

Our internal understanding and experience of our own gender. Each person’s experience with their gender identity is unique and personal.

Used to describe people who are born with any of several variations in sex characteristics, including chromosomes, gonads, sex hormones, or genitals that can’t be classified as typically male or female.

Intersex Pride Flag – utilizes yellow and purple, which are considered “hermaphrodite” colors, according to the IHRA organization. Additionally, this design moved away from the rainbow symbolism and selected these colors because neither is associated with the social constructs of the gender binary. The circle, perfect and unbroken, represents the wholeness of intersex people. It is a reminder that intersex people are perfect the way they are or choose to be.

A woman who is predominately attracted to other women. Some women prefer the word “gay” – it’s all up to the individual and what fits their identity best.

Lesbian Pride Flag – This is the most updated version of the lesbian flag. The colors from top to bottom represent: Gender non-conformity, Independence, Community, Unique relationships to womanhood, Serenity and peace, Love and sex, and Femininity.

Used to describe people who experience their gender identity and/or gender expression outside of the man/woman gender binary. Genderfluid, genderqueer, polygender, bigender, demi gender, or agender, are similar to nonbinary, but not necessarily interchangeable.

Nonbinary Pride Flag – The yellow stripe represents people whose gender exists outside of the binary. The white stripe, people with many or all genders. The purple, people with genders considered a mix of male and female. The black describes people who identify as not having a gender.

A modern umbrella term used by some indigenous North Americans to describe gay, lesbian, bisexual, and gender-variant individuals in their communities. The term was adopted in 1990 at an Indigenous lesbian and gay gathering to encourage the replacement of the anthropological term berdache [a non-Native word associated with prostitutes] … However, the concept of ‘Two Spirit’ is one that predates European colonization of North America. Two-spirit individuals traditionally were viewed as holding a masculine and feminine spirit.

While some have found the term ‘Two-Spirit’ a useful tool for intertribal organizing, not all Native cultures conceptualize gender or sexuality this way, and most tribes use names in their own languages. While pan-Indian terms are not always appropriate or welcome, the term has generally received more acceptance and use than the term it replaced.

Used to describe people who are attracted to people of any gender, or to people regardless of their gender. Some people may use the words bisexual and pansexual interchangeably, and others only use one word exclusively to describe themselves.

Describes a person whose sense of personal identity and gender does not correspond with their birth sex.

Trans Pride Flag — Monica Helms, an openly transgender American woman, created the flag in 1999. The light blue and light pink are the traditional colors for baby girls and baby boys, respectively. The white represents intersex, transitioning, or a neutral or undefined gender.

An umbrella term used to refer to an identity that expands outside of heterosexuality. Due to its use in political movements and history as a reclaimed slur, queer still holds political significance.

This is a rebooted pride flag by Daniel Quasar. Representation matters — especially for the most marginalized communities. The reboot is meant to be inclusive of queer people of color and trans people. 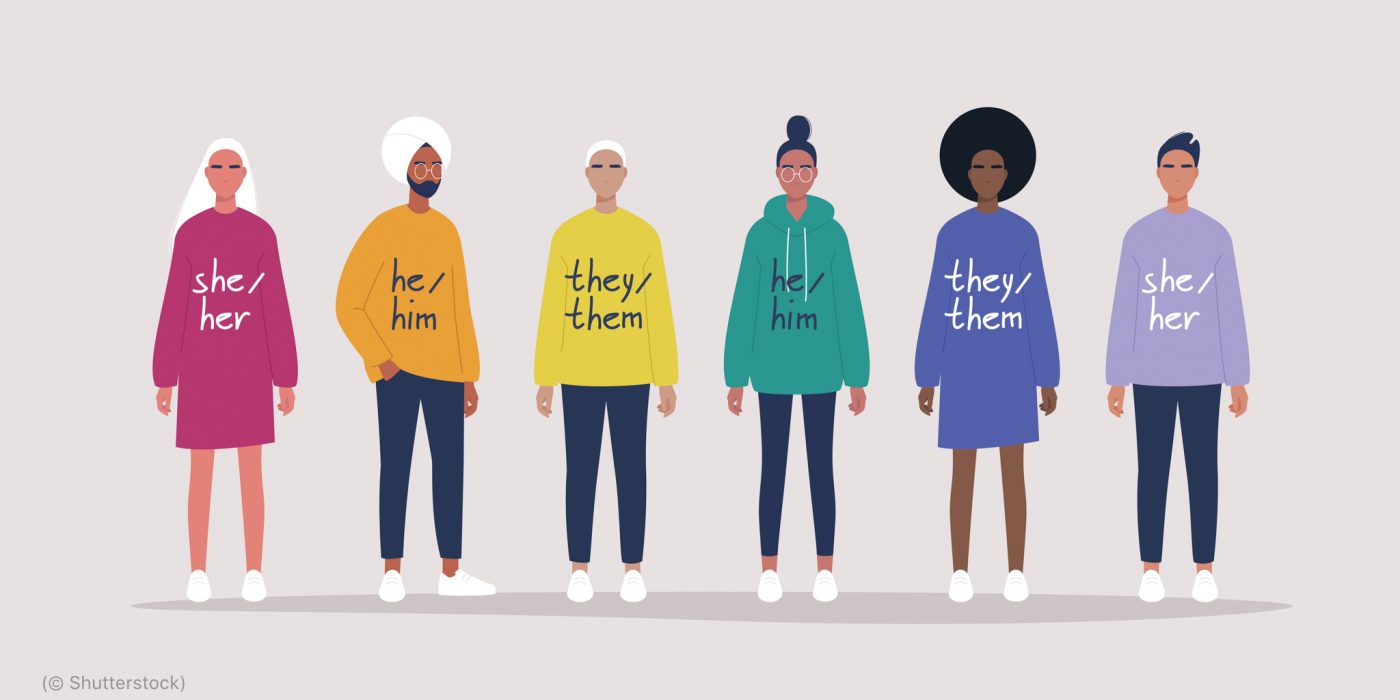 Pronouns are words that refer to either the people talking (like you or I) or someone or something that is being talked about (like she, they, and this). Gender pronouns (like he or them) specifically refer to people that you are talking about. The integration of gender pronouns into personal introductions is becoming more expected and normal.

Common lists of pronouns you’ll see in email signatures, or hear during personal introductions are:

he/him/his – used most often by cisgender and transgender men

she/her/hers – used most often by cisgender and transgender women

Folks may list a combination of the above, or include others, to suite their identity. An individual may feel represented by both ‘she’ and ‘they’, and so they list both together (she/they).

The power of 'they'

These lists include the different forms of each pronoun as it might be used in conversation. Incorporating non-gendered pronouns like “they” into your vocabulary is a tool that actually makes life easier! For the most part, ‘they’ is safe to use as an all inclusive pronoun until you can confirm a person’s correct pronouns. Moreover, you can implement this pronoun in more than just queer interactions. It’s a great way to stay respectful until you know a person’s gender. You’re probably already doing it without realizing!

Talking to an expectant mother. “When are they due?”

Discussing a person you have yet to meet. “What do they do for a living?”

Take it from Me

Using the correct pronouns for individuals is so important. It isn’t something you can guess correctly just by looking at someone. As a queer person who often gets misgendered, I can attest that it feels just as awful every time. It makes me feel as if my identity is invisible to those around me.

So, include your pronouns in your email signature and personal introductions! Ask others what their correct pronouns are! Both actions open the door for queer folks to feel comfortable sharing their correct pronouns and feel seen. And remember, don’t assume anybody’s gender. Taking the time to find out shows that you care, and paves the way for inclusivity.

University of Norther Colorado, The Gender and Sexuality Resource Center

Volvo LGBTQ+ Pride Flags and What They Stand For

Share this with your friends and family who just d