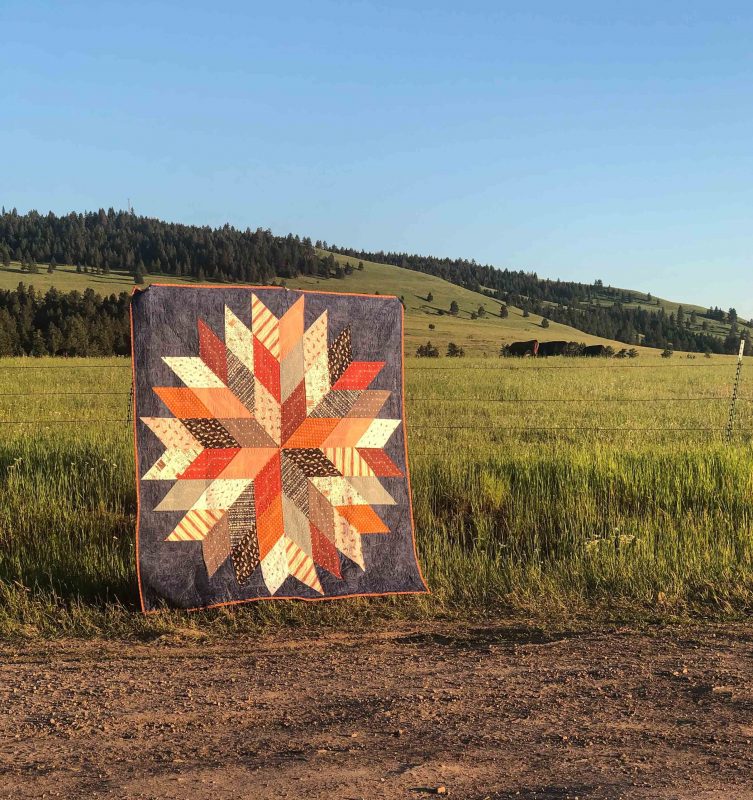 From the moment I saw it, I loved the Homestead Star Quilt pattern. Featuring an intricate star with 24 points, the mix of modern and traditional spoke to me. So, I resolved to make it as a wedding gift for one of my very best friends and her husband-to-be.

I’d picked out my fabric and was already halfway through cutting it out when we received a message from a concerned customer regarding this pattern’s design. It read:

“I just bought the Big Sky Star Quilt pattern, but after buying this pattern, I started researching more about the Lakota quilting traditions. I am reaching out because the information that I have access to leads me to believe that we, as white people, should not be making and especially not be making money from star quilts. With our history of cultural oppression and exploitation, I believe it is important to err on the side of caution. I know that white people monetizing Indigenous culture is actively causing harm to Native people. I urge you to remove the patterns from the store and donate to the Lakota tribes.”

Though it came as a blow, we were so appreciative to this customer for voicing their concerns. It is incredibly important for those in a position of privilege to continually ask the question, ‘is this cultural appropriation or appreciation?’ And – if it is appropriation – ‘what can I do to make sure I’m not perpetuating this exploitation of culture?’

So I put my quilt-making on hold and instead began to do the necessary homework.

As you can imagine, the establishment of the Fort Peck Indian Reservation was preceded by almost 200 years of violated treaties, smallpox epidemics, and starvation tactics on the part of the American government. In 1883 the US Military began systematically exterminating buffalo as a means to starve Plains tribes, and, in a round-a-bout way, this is what eventually led to the Native tradition of Star quilts.

Buffalo robes were symbols of great honor bestowed at traditional tribal ceremonies, but, as hides became scarce, the tradition was forced to adapt. In the late 1800s missionaries from the Dakota Presbytery introduced the art of quilt-making to the the Reservation. And so Star quilts, featuring colors and designs traditional to the Sioux and Assiniboine cultures, began to replace buffalo robes as a symbol of honor and achievement.

Given all this history, I (as a white person) had to think carefully about how to approach the making of a Star quilt. So I started by contacting the designer.

The Homestead Star Quilt was designed by third generation Montanan, Lindlee Smith. Though not Native, she grew up in Wolf Point on the Fort Peck Indian Reservation, which – since 1888 – has been home to the Dakota-Lakota-Nakota (Sioux) and Dakota (Assiniboine) nations.

I reached out to Lindlee, raising the concerns our customer had posited, and was relieved to learn that this question of appropriation versus appreciation was at the front of her mind when she began designing her patterns.

She explained to me that her designs are a take on the traditional ‘Morning Star’ motif. Her hope and intention with her patterns is to bring awareness to the history of the Star Quilt on the Fort Peck Reservation, while also doing something to help support and continue the tradition.

To this end, Lindlee worked with Rose Atkinson – a long-time instructor of Star Quilt Techniques at Fort Peck Community College – and five dollars from every one of her Patchwork Lone Star quilt patterns sold goes towards providing materials for students of this course who are unable to purchase their own.

Additionally she has two blog post on her website which cover some of this history of Star quilt-making in the Assiniboine and Sioux cultures. (You can find the links below.)

While I was so glad to learn that these patterns weren’t designed with indifference or negligence, I knew that my work was not yet done.

As culture evolves and intertwines, the question of appropriation versus appreciation becomes more difficult to decipher. While quilting itself was introduced by white colonizers, Native peoples adopted this craft in response to a stifling of their culture. Oppression (and this is true of many marginalized groups) led to creation, and a new form of cultural expression. It would be wrong co-opt that expression after everything these people were forced to go through.

So, in order to make this quilt, I decided on two things –

First, I would do my part to share the history and meaning behind the Star quilt design with not only those receiving the quilt, but those who might be interested in making it. Second, I would make my own donation to Fort Peck Community College.

I believe that the line separating appropriation and appreciation has everything to do with credit and compensation. Throughout history, cultural arts and practices have been shared, and swapped, but they’ve also been forcibly taken, and I have no interest in perpetuating the latter.

You may disagree with my approach to this situation, but I think the only way to truly navigate and unpack this question of appropriation is to try, and then be open to the conversation that follows. No matter how difficult.

To learn more about the technical making of this quilt, read Making the Homestead Star Quilt – Part 2!

Star Quilts on the Northern Plains of Montana: Part 1 – A Brief History

Share this with your friends and family who just d